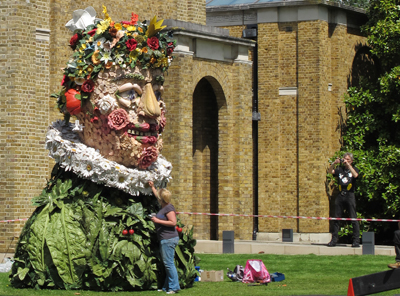 Posted by Pablo Gil-Cornaro at 4:56 PM No comments:

JUSTIN DILES’ SELF-SUPPORTING EIGENFORM WALL MEASURES 11 FEET IN LENGTH, 6 1/2 FEET IN HEIGHT, AND VARIES IN WIDTH FROM 2 INCHES TO 2 FEET. (PHIL ARNOLD)
A fellow at the Knowlton School of Architecture expounds on the work of Le Ricolais with a new plugin for Rhino.
For Justin Diles, Ohio State University’s KSA LeFevre fellowship was a fateful progression of past experiences and ongoing professional work. While studying under Cecil Balmond at the University of Pennsylvania, Diles encountered hand-built models that Robert Le Ricolais constructed with his students in the 1960s. “Le Ricolais built models with his students for 20 years,” said Diles, “and one that I found he had built out of tubular steel and loaded to failure. It produced a really beautiful deformation pattern.”
Two years later, Diles was teaching at the University of Applied Arts Vienna in the master class studio of Greg Lynn. While in Austria, he met Clemens Preisinger, a developer who, with support from Klaus Bollinger’s firm Bollinger Grohman Engineers, wrote a new plugin for Rhino called Karamba. The plugin is an architect-friendly, finite, element analysis method that delivers fast, intuitive graphic information, along with the requisite numbers. The plugin would figure heavily in Diles’ fellowship work.

DILES WORKS ON HIS EIGENFORM WALL. (PHIL ARNOLD)
When he arrived in Ohio, Diles’s work progressed along two parallel tracks: The first was developing a computational design component with a formal vocabulary of the structural deformation Le Ricolais’ model. The second was developing a material capable of realizing the design. In Karamba, Diles augmented a tectonic simile from le Ricolais’s latticed models as surfaces for fabrication with composites. “That was an ah-ha moment for me,” said Diles. “I began taking a single assembly and ran it through multiple iterations of buckling deformations.” Diles layered multiple deformations into patterns that produced a puzzle of nesting components. Black and white coloring helped him track the layers and lent a graphic, architectural appeal.
After the design was finalized, Diles made a series of molds from lightweight Styrofoam. “It was interesting because it’s usually a junk material and, in a way, has a very bad reputation as a material,” he said. “But it’s recyclable and can hold a tremendous amount of weight and is easily worked on a CNC mill.” A 3-axis mill generated components of a mold, which were taped together and sealed with Plaster of Paris to prevent resins of the composite from bonding to the foam. “We used a lot of tricks from Bill Kreysler’s fabrication shop,” said Diles. The final mold was sealed with Duratec StyroSheild.

When formed on a CNC mill, Styrofoam became a workable material for a mold. (Phil Arnold)

Diles and KSA students tape the mold together. (Phil Arnold)

Small components of the mold were milled and assembled. (Phil Arnold)

Mold components are sealed with Plaster of Paris and Duratec StyroSheild. (Phil Arnold)

Chopped fiberglass adhered to the high and low curves of the mold with resin. (Phil Arnold)

The black sections of the structure are hollow. (Phil Arnold)

A fiberglass composite was a lightweight material solution. (Phil Arnold)

The final structure looms behind a smaller model. (Phil Arnold)

Posted by Pablo Gil-Cornaro at 10:41 AM No comments: